Keep the horses warm during winter

The best way to keep horses warm at winter is to feed the horse plentiful hay as the digestive process produces heat through natural microbial fermentation in the hindgut. Often horses need a little extra roughage, Betfor or Health fiber supplement during winter.

Betfor has to be soaked before being fed to the horse and can be fed warm. If giving more than 500gr. Health Fiber per feeding 5-10 minutes soak time in water is recommended before feeding.

Unlike humans, ulcers in horses are not caused by bacteria, but are associated with increased acid exposure on the mucosa, caused by feeding and management practices. The digestive system of the horse is adapted to continuously consumption of feed for between 16 and 18 hours a day. The horse will be affected negatively, if not allowed sufficient time for feeding.

Feeding associated stomach ulcers are typically located in the upper part of the stomach, and a 5 point scoring system has been developed to help classify the severity of equine ulcers in which grade 0 is normal and 5 classifies deep and penetrating ulcers.

Horses diagnosed with gastric ulcers or suspected of having ulcers, it is important to reduce the proportion of starch intake and increase the amount of roughage. The starch typically delivered in cereal products lowers the gastric pH below its natural level. The low pH irritates the stomach lining and ulcers can develop or exacerbate.

Roughage is essential in the treatment and prevention of ulcers, and horses should always have access to roughage. Chewing produces large amounts of saliva (10-12 liters/kg hay). Saliva contains bicarbonate that buffers the stomach acid. Besides, chewed roughage has a tendency to absorb excessive gastric acid.

Your veterinarian can decide if your horse needs medical treatment like acid-reducing drugs, such as GastroGard, or if changes in feed and management practices are sufficient. Various products are available on the market to help preventing the risk of stomach ulcers and protect the lining, but only your veterinarian can prescribe curative products.

Equsana’s feed guide to a 550 kg horse with ulcers

2 kg Recover – can be soaked in lukewarm water

200 g beet pulp (dry weight, must be soaked in water according to instructions on the bag)

If the horse is in need of additional energy to maintain weight, Health Fiber and/or Body Boost and oil can be supplemented.

The horse should be allowed concentrated feed in 4 rations a day and have access to water and forage ad libitum. It is recommended to mix Recover, lucerne and beet pulp immediately before feeding.

The feed guide may also be used for horses suspected of having gastric ulcers.

You may continue feeding beet pulp

How much does the automatic horse waterer provide per minute?

Besides keeping the bowl clean, it is equally important to check if it delivers the targeted 8-10 liters of water per minute. Push on the pressure plate while placing a bucket below to check on how much water it provides in a minute. If the waterer does not yield 8-10 liters of water, the horse should be offered water in a bucket /crib. The horse is unlikely to spend the needed extra time by the waterer if it only delivers 3-4 liters per minute. Consequently, the water intake will be less than required, and this will negatively impact the normal digestion and fluid balance.

A grazing muzzle is commonly recommended for restricting grass intake in overweight horses.

In a trial with muzzled horses, researchers demonstrated a reduction of grass intake by 80% indicating that the method is very effective. The grass intake of the horses wearing muzzles was measured over increments of three hours and compared to three-hour increments without the muzzle. The study confirmed observations made in other studies – horses adjust their grass intake according to the time spent on the grass. This means that a horse turned out for only a few hours on pasture consumes relatively more grass per hour compared to a horse that are turned out grazing the entire day. Thus, restricting time on pasture is not always an effective method to reduce grass intake.

A grazing muzzle represents an effective means of limiting grass intake and it allows the horse to spend more time on pasture. The grazing muzzle easily allows for drinking. However, behavioral issues should be considered when using a grazing muzzle. In groups the muzzled horse may have difficulties grooming and displaying normal defensive behavior.

Electrolytes are salts or ions, such as sodium, potassium, and chloride, and are essential to cell functions and maintaining the right blood pressure. Electrolytes exist in a delicate balance between fluid and salt content in the body and this balance is challenged if the horse sweats excessively or drinks too little.

If the horse does not intake enough water, for instance during long-distance transportation or while at shows or other events, it should be encouraged to drink by adding small quantities of apple juice to the water. Sometimes it also may help bring water from home, as some horses refuse to drink if the water tastes slightly different. You may also offer soaked beet pulp and mash to add extra liquid to the feed ration.

If the horse is sweating excessively, it may be necessary to supplement with electrolytes to replace those lost in the sweat. You should follow the dosing guidelines suggested on the commercial formulation since the concentration of electrolytes varies between products. Horses supplemented with electrolytes will feel thirstier and are consequently in need of access to ad libitum clean water.

Feeds for horses working at high intensities typically contain higher contents of salt. These feeds, therefore, partially address the loss of electrolytes through the large amounts of sweat.   Additional supplements may therefore only be required in situations with extreme sweat production, such as shows, lessons or training in hot weather.

Is the body score of a horse predetermined?

A study conducted by a New Zealand researcher (Lucy Waldron), has documented differences in the composition of the fiber digesting bacteria between overweight, normal, and lean horses. This is interesting, and we are eager to learn if this composition can be affected by feeding, or if it might be genetically determined by the individual horse.

Colic is the common name for “abdominal pain” and is associated with conditions in the stomach, intestines or less commonly with the liver, kidneys, and the bladder.

Symptoms of colic are:

Too much grain, cereal, grass or haylage

Accumulation of gas and distended intestines are very painful conditions. Maldigestion leads to excessive gas production, as is often observed when excessive amounts of lush spring grass are ingested.

Increased intake of straw, for instance bedding if bedding was recently changed from shavings to straw.

Decrease in exercise for example, by stall confinement (injury etc.)

The large colon has three narrow areas prone to blockages as ingesta traverse the digestive tract. Spasmodic colic can occur in conjunction with obstipation, partly because gas is trapped behind the impaction and partly because of the indigestion that occurs when ingesta are maintained too long at the same place which is the case with obstipation.

Causes of displacements and torsions

Spatial changes in the abdominal cavity, such as in mares who have just foaled.

Inadequate high fiber feed, so the intestines are only lightly filled.

Intestinal torsions and entrapments are with the most serious and severe forms of colic and immediate hospitalization is needed, as emergency colic surgery may be required to save the horse. A horse with intestinal torsion is in severe pain and will exhibit profuse sweating, rapid breathing, and exhibit a very restless behavior. Horses with such pain manifestations pose a danger to itself and its surroundings and caution needs to be taken in this situation.

Intestinal torsion means that the gut is twisted along its own axis and is often dislocated from its normal position. Ingesta are trapped and blood supply is compromised. A lack of oxygen and nutrients to a segment of the intestine leads to severe damage and tissue death. This leads to a release of endotoxins to the blood stream, which makes the horse very sick. During the surgical procedure it may be necessary to remove the affected segment of the intestine.

The veterinarian should always be consulted in case of acute profuse diarrhea, as horses are very vulnerable to this condition. The horse will quickly loose large amounts of salts and nutrients because of the inflamed and compromised intestinal lining.

Many cases are less severe where the feces often resemble cow pats rather than the normal equine fecal balls.

Abrupt feed changes or excessive amounts of cereal or grain, grass or haylage.

If the horse is overall healthy looking, the loose feces will often normalize after a period of eating good hay. It is essential that horses receive good quality hay to maintain or restore the intestinal bacterial flora. In some cases it may also be necessary to supplement with a concentrated (probiotic) of beneficial intestinal bacteria in paste or powder formulation and / or pH-stabilizing products.

Compared to hay, haylage does not have the same beneficial effects on the intestinal environment, as it typically has a lower pH and contains lactic acid and other by-products from the fermentation process.

The horse’s esophagus runs on the left side of the neck and is approximately 1.5m in a warmblooded horse. During chewing, small loosely formed balls of ingesta are produced and swallowed pass through the esophagus in approximately 10-15 seconds. Feed needs to be finely chopped and saliva has to be added to allow the horse to swallow it. It is important to never feed the horse items that can swell up within the esophagus, as it can cause choking.

The stomach of the horse is relatively small considering the overall size of the animal. A regular warmblooded horse may only carry 15-20 liters. After water is ingested, it quickly leaves the stomach and passes to the intestines, whereas feed tends to stay in the stomach for 1- 5 hours.

The horse’s large intestine (hindgut) consists of colon and cecum, and together they accommodate 100-120 liters. They both function as fermentation chambers that allows for the dietary fiber to be converted into energy through a fermentation process. The horse harbors millions of microorganisms in the hindgut and they are responsible for the fermentation process, that converts fibers into volatile fatty acids that are utilized as an important source of energy.

It takes 1-2 days for the ingesta to pass through the large intestines, all depending on how easily degradable the fiber portion is. Horses usually defecate approximately 12-15 times in a day, and firm fecal balls with a glossy surface can be an a indicator of good health. The fecal balls may often reflect the ingested feed and the condition of the digestive system. Thus, horse owners can keep gather useful information about the horse’s well-being, and most importantly notice if any changes occur. 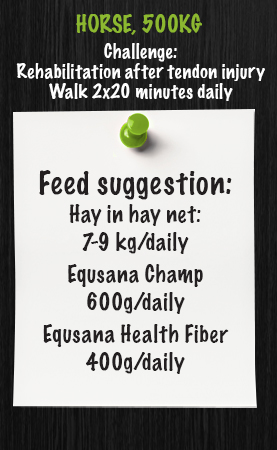